Lessons from a cross country meet

This past Saturday morning, Lillian, Ryan, and I went to Ballinger for a cross country meet. Ryan and Micah are part of the Cornerstone team that came in second place in their division. It was a great meet, but the the real drama came at the end of the race.

There was a young man running in the race that was so far back from the rest of the pack that he came in about 10 minutes after the rest of the field had finished. In fact, most of the people watching the meet had already left, thinking the last runner had finished. Several of the workers had already put some of the equipment away, and the water girl was rolling the water containers away when she was told to come back because there was one more runner still out.

Finally, the young man came into view as he entered the stadium for the final few yards. As he approached the finish line, the few people who remained, including me and my wife, encouraged him with applause and tears. Why tears? Because we knew the background story. 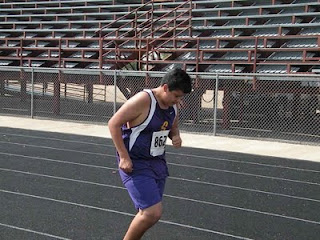 Just one week earlier, this young man's father was killed in a car accident. Three miles is not an easy run for anyone, but especially for someone who is consumed by grief. Yet, it was apparent that this young man was running with his dad in mind. I'm not sure how much distance running he had done previously, but I could tell he was determined to run this race and finish it.

When he did finish, he pointed to the sky with both hands, and ran to his mother for an emotional embrace. 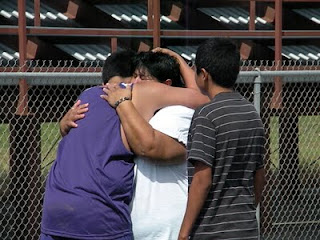 I don't think there was a dry eye among those watching this scene. At this point, I returned to our vehicle, reflecting on what I had just witnessed. Little did I know there was more to come. My wife stayed behind a few more minutes and filled me in later on what happened after I left.

It seems that a runner from another school was so moved by what he saw that he gave his hard-earned medal to the young man who had lost his father.

It was quite an emotional ending to a beautiful morning. Even as we left the parking lot, we saw people wiping tears from their eyes as they drove away.

What did I take away from that morning? I learned about determination from a young man who would not be denied his goal, no matter how painful and difficult it was for him to complete it. And I learned about selflessness from another young man who had worked hard to earn a medal that was only given to a select few, yet was willing to give it up in order to offer comfort and encouragement to someone in need.

It was a beautiful Saturday in Ballinger, Texas.
Posted by Jehu Hernandez

Wow...couldn't fight the tears as I read this. Thank u so much for sharing this story.

Yes, it was hard to keep our emotions in check as we saw finishing the race and embracing his mom.

That is a beautiful story! Thank you for sharing!