Last week, I posted some of Bethany's and Kelli's early writings from grade school. Here, now, is an example of Ryan's writing from the third grade. A little bit of context: Ryan was running for class president against a little boy named Benny. Apparently, Ryan was upset because some of his classmates were saying they were going to vote for Benny, so out of frustration, he called Benny the worst possible name he could think of. This letter is an apology to his teacher for his actions, which apparently included arguing with her (the teacher). You can enlarge the letter by clicking on it. 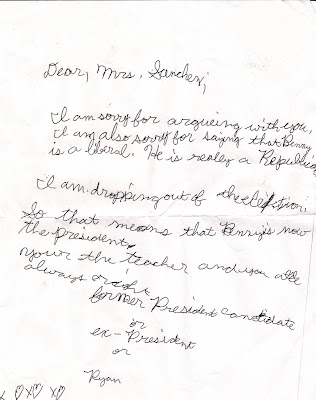 Email ThisBlogThis!Share to TwitterShare to FacebookShare to Pinterest
Labels: Family

Oh, I LOVE IT!!! Just love it! What a smart, conservative, boy! By the way, I mean it as a compliment when I say "conservative."

I guess now you will need to find some of Joey's writings...don't leave us hanging.

Yes, you're right. Surely, we've got some of Joey's writings somewhere at home. We'll do an all-out search!